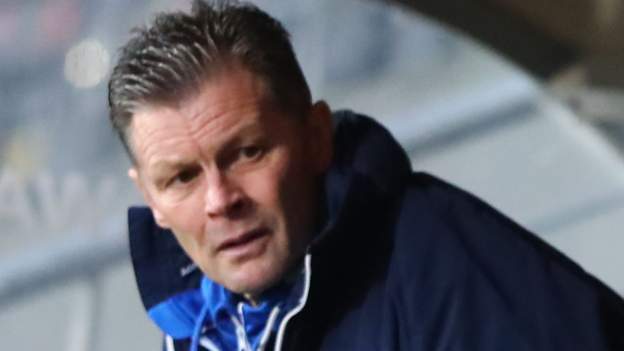 Shrewsbury City supervisor Steve Cotterill has been readmitted to hospital as he’s affected by Covid-pneumonia.

Cotterill, 56, spent 33 days in hospital after being admitted with Covid-19 signs on 15 January.

After being launched from Bristol Royal Infirmary, he was working from his Bristol house through cellphone and Zoom calls.

“He is been unhealthy for the reason that center of final week. I may inform by his respiration and his coughing,” stated City assistant supervisor Aaron Wilbraham.

“He was admitted to A&E on Sunday morning after which again on the ward with pneumonia, brought on by Covid-19,” he advised BBC Radio Shropshire.

“It is a case of antibiotics and drips and one other week in hospital.

“He is in one of the best place however I really feel gutted for him. From all my time with him at Bristol Metropolis, I do know he is the form of bloke who by no means takes a time without work.

“And, when he got here to Shrewsbury, he was all the time in on a Sunday and a Wednesday when everybody else was off. It’s going to be killing him not being there.

Wilbraham, who has been taking each day cost of the League One aspect in Cotterill’s absence, added: “He is one of many hardest, fittest guys I do know.

“All the time on the bike. All the time within the gymnasium. I’ve by no means recognized him have a chilly or perhaps a sniffle.

“For him to have all this time without work, then time at house, and now get this different setback is so exhausting on him. However I understand how robust and hard he’s. He’ll take care of it, no downside.

“It occurred in hospital too. Simply when he felt he was getting someplace he’d hold getting these setbacks.

“We hold telling him to chill out, however it’s very exhausting to inform a workaholic to not work too exhausting.”

Shrewsbury are seventeenth in League One, 12 factors off the play-off locations however with video games in hand, following Saturday’s 2-1 defeat at Joey Barton’s Bristol Rovers – their first defeat in 5.